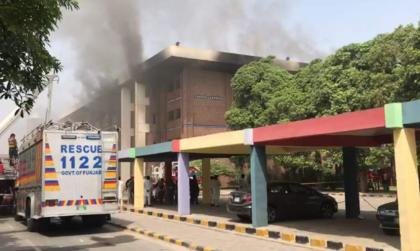 Firefighters are still battling to put out the fire on the third floor of medicine using a crane.

Rescue 1122 rushed to the scene and began the operation as soon as they learned of the fire. Clouds of smoke rose from there.

Rescue 1122 uses the help of a crane to eliminate the fire. However, no loss of life was reported.

The fire broke out on the third floor of the building. The rescue team said investigations would be carried out to see if someone had deliberately lit the medicine store.

Stock of medicines worth millions reduced to ashes on the third floor.

After eliminating the fire, the police will collect clues for forensics.

All departments will be included in the survey including MS, DMS and Security Officers.

Punjab Chief Minister Hamza Shahbaz ordered the Health Secretary to submit a report on the incident after a detailed investigation and also urged the authorities to find the culprits behind the incident.

After 3 hours of rescue operation, firefighters are still trying to put out the fire. The operations scheduled at the hospital for today have been cancelled.

There is a sense of dread among parents who brought their children there to see a massive fire that engulfed the pharmacy on the third floor.